The Gibson Les Paul is a true icon. For over 60 years, it has been used by some of music’s most legendary guitar heroes, and has played an essential role in forming the rock sound that we all know today.

Only the Fender Stratocaster is within the same ballpark of fame, and as one of the world's most renowned and longstanding guitar designs; the Les Paul's history is rich and varied. There are many Les Paul models available today, and in this article we're going to help you to distinguish their differences. 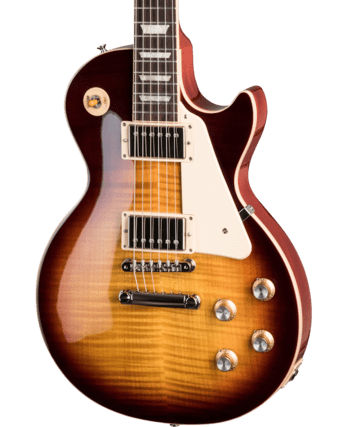 Recognisable for its classic single-cutaway body design and dual humbuckers, Gibson also pioneered the use of Mahogany in guitar construction with their game-changing Les Paul model. Players have revered the Les Paul for its thick, gnarly and harmonically-rich tones, with the versatility to transcend a range of musical styles.

The release of Gibson’s Core Collection has seen their entire catalogue become more refined. And under the leadership of new Gibson CEO James Curleigh, the Les Paul range has never been so diverse. That's why we've put together this article, to identify the main differences between the Les Paul models in Gibson’s current lineup.

History of the Les Paul

The origins of the Les Paul guitar go back all the way to the 1950s. Gibson’s then-CEO Ted McCarty enlisted the help of renowned musician Les Paul to collaboratively design a solid-body electric guitar that could contend with Fender’s Stratocaster.

As a prolific musician always looking to push the boundaries and pioneer new ideas, Les Paul tried to combat and rectify issues he’d faced with other instruments; resolving them with this new design. Frustrated by the feedback he experienced with his electric hollowbody guitars, he was motivated to help construct a guitar that could prevent this problem.

Unveiled in 1952 and still in production to this day, the Les Paul model is arguably Gibson’s biggest success. With a full Mahogany construction, a Rosewood fingerboard and a 24.75” scale length, the Les Paul is adored for its great playability and big sound; mostly attributed to its pickups.

With the original model sporting a pair of P90 pickups, from 1957 Gibson decided to offer the Les Paul Standard with dual humbuckers for improved sonics and reduced feedback. Subsequent models, however, have featured different configurations, including a triple-stack of humbuckers in early Gibson Les Paul Custom guitars. 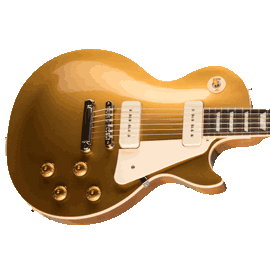 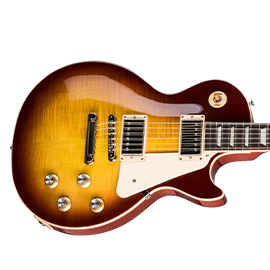 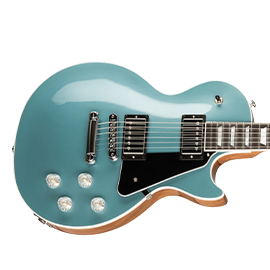 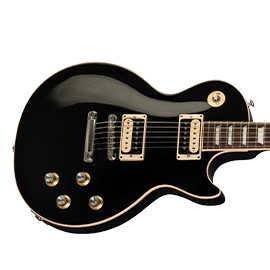 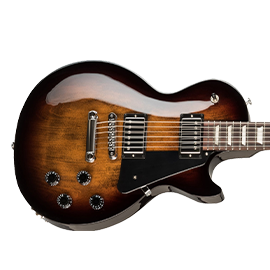 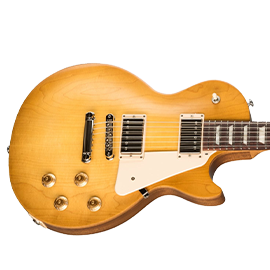 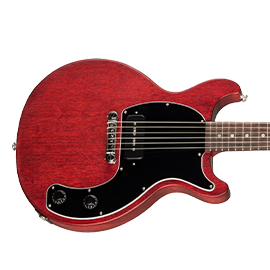 Since its inception, the Les Paul has largely maintained its iconic design in terms of aesthetics and construction. However, it has undergone many tweaks over the years, and the Les Paul exists within many of Gibson's product ranges to accommodate different players and budgets.

In the rest of this article, we will take a closer look at Gibson’s Les Paul offerings to help you to decide which guitar is right for you! We won’t include any of Gibson’s Custom Shop or Limited Run models, just those from the core range.

The Les Paul Standard is the flagship Gibson model. As their poster boy for decades, the Les Paul Standard is available in two different versions as part of their Core Collection; Standard '50s and Standard '60s. The former retains the core construction elements of the earliest '50s models, and is ideal for even the most picky of Les Paul connoisseurs and purists.

With no weight-relief at all, the Les Paul Standard '50s is one of the heaviest models in the lineup. Although not the most comfortable, it does provide the richest and most authentic tones, with a super-creamy low-end and a warm mid-range. Adorned with a Figured Maple top, the Standard '50s Les Paul has all the beauty and charm of the desirable ‘59. Its fully-rounded 'Vintage '50s' neck profile is more on the substantial side, but it's great for those that love to dig in when they play.

With Burstbucker 1 and 2 pickups in the neck and bridge positions respectively, the Gibson Les Paul Standard '50s has an older voice that recaptures the vintage tones of yesteryear. Following a PAF design and built upon Alnico II magnets, the Burstbuckers produce a full-bodied and airy tone that will highlight every dynamic nuance of your playing style, thanks to their medium outputs. However, they also excel with overdrive and distortion, with pronounced mids that can really sing in a busy mix.

The Gibson Les Paul Standard '60s model is spellbindingly nostalgic, faithfully recalling the traditional features and design elements that true Gibson fans admire. Similar to the Standard '50s in terms of its construction, including no weight-relief, the Standard '60s does however boast a more three-dimensional AA Figured Maple top, and features a thinner 'Slim Taper' neck profile for a contemporary feel.

The pickups in the Gibson Les Paul Standard '60s are also different. With Burstbucker 61T and 61R humbuckers in its bridge and neck positions respectively, these PAF-style Alnico V pickups are voiced to resemble that unmistakable '60s Les Paul tone, offering plenty of upper mid-range bite.

Gibson has ditched the old High Performance range and replaced it with the more refined Modern series. Adhering to a similar formula, the Les Paul Modern has a contemporary twist that makes it more suitable for 21st Century guitarists. With bold aesthetics and a raft of cutting-edge appointments, these professional-grade instrument offers incredible tones and unrivalled playability.

Les Paul Modern encompasses everything that makes a Les Paul what it should be, but supercharges the classic design. With an 'Asymmetrical Slim Taper' neck profile, you're provided with optimal support at all areas of the neck, while the ergonomic 'Modern Contoured Heel' enables great access to the higher frets. Its Mahogany body is lightened with Gibson's 'Ultra-Modern' weight relief method too, which not only makes the guitar feel more comfortable to play, but it also enhances resonance and harmonic content when you're plugged in.

The Modern is equipped with super-hot Burstbucker Pro humbuckers, with a standard model in the neck and the Pro+ in the bridge position. Based off a classic PAF, these high-output pickups are highly-versatile, giving mid-focused vibrancy to not just clean tones but also filthy high-gain.

With 4 push-pull pots, the volume controls let you coil-tap the humbuckers for single-coil-esque sounds, but the tone controls unlock even more interesting sound-changing delights. With these, you can engage a 'Pure Bypass' mode that removes the tone circuitry for a clearer top-end, and also employ an out-of-phase function. The tonal possibilities are almost endless with the Gibson Les Paul Modern!

The Gibson Les Paul Classic is another model that hearkens back to the golden age of Gibson. Arguably one of the most stunning yet understated designs on offer, the Classic comes in a bunch of timeless finish options and features classy cream binding and zebra Burstbucker pickups.

Despite its name, the Les Paul Classic has some modern touches. With its body undergoing Gibson’s renowned ‘9-Hole’ chambering process, the Les Paul Classic is light and practical for live performances, with the chambered effect also enhancing resonance and projection. A 'Slim Taper' neck profile is another contemporary feature, based off the thinner '60s carve.

In true LP style, the Classic features a pair of potent-sounding Burstbucker humbuckers, with the 61T and 61R versions in the bridge and neck positions respectively. These powerful pickups emit a strong and vibrant upper mid-range, akin to that of a traditional PAF. Warm and airy with clean settings, these humbuckers also deliver plenty of bite when used in conjunction with overdrive.

Although its retro styling hints at traditional, beneath the Les Paul Classic's surface there is the same clever circuitry that features in its Modern counterpart. With all controls boasting push-pull functions, the volume knobs allow you to coil-tap the humbuckers for convincing single-coil sounds. There's extra flexibility with the tone controls; one of them engages a pure bypass mode that removes the tone circuits from your signal, letting you attain a purer and unrestrained tone. The second tone control unleashes a sweet out-of-phase sound, which can really embellish clean chords and passages.

The Les Paul Studio has been a key part of Gibson’s catalogue since 1983; the year it was first introduced. A more streamlined version of the flagship Standard models, the Gibson Les Paul Studio still provides that iconic LP sound and vibe but at a more affordable price-point.

Like the Modern model, the Studio’s body has been weight-relieved via Gibson's 'Ultra-Modern' process, to lessen the strain on your shoulders and back when playing live. A plain maple top gives a rustic old-school aesthetic that is sure to appeal to those looking for a more understated guitar. The Les Paul Studio's neck also follows a 'Slim Taper' profile, happily suiting contemporary guitarists looking for a fast and comfortable playing experience.

A pair of powerful, high-output 490 series humbuckers really dish the dirt. The 498T bridge pickup projects potent tones, saturating nicely with overdrive and distortion. The 490R neck humbucker is tamer, with a more vintage character akin to that of a traditional PAF. Regarding bonus circuitry, the Studio's push/pull coil taps give you single-coil-esque sounds for extra tonal flexibility.

The Gibson Les Paul Tribute is even more affordable than the Studio, but still packs a serious punch. With a very retro and stripped-down look, the main physical difference you’ll notice between the Tribute and the rest of the range is its finish. With a super-smooth satin lacquer, the Les Paul Tribute will serve as a great live instrument, with its neck feeling sleek no matter how much you sweat!

Speaking of the neck, the Les Paul Tribute has an old-school 'Rounded' profile; something that will surely appeal to traditionalists. However, this carve isn't too chunky, and most modern players would still find it comfortable and fast. The Tribute's body is weight-relieved with Gibson's 'Ultra-Modern' method, making it deceivingly light and very ergonomic for live use.

The Les Paul Tribute sports a pair of Gibson's acclaimed 490 series humbuckers, just like the Studio model. With a mild 490R pickup in the neck, the 490T in the bridge position delivers that iconic and powerful Les Paul tone, with enough bite and punchiness to satisfy players of heavier genres. Crank up the gain and expect a tight bass response with plenty of saturation, delivering beyond that of most normal PAFs.

The most inexpensive Gibson Les Paul models in the current catalogue are the Junior Tribute DC and Special Tribute DC. These guitars are a no-frills workhorses, with plain aesthetics and bare-bones features. However, that doesn’t mean that the Junior and Special models are bad, as these rock 'n' roll pure-breds have plenty of character and deliver the punchiest of tones with their P90 pickups!

Comprised of Mahogany bodies as you'd expect, the Tribute DC models do however sport Maple necks; breaking the all-Mahogany blueprint. Pumping out more vibrant highs, the bright-sounding quality of Maple ensures that notes and chords have lots of clarity and a fast, snappy response. It's worth mentioning that the Gibson Les Paul Tribute DC guitars feature no weight-relief at all. This traditional touch yields girthy lows and a substantial feel, something that old-school rockers will adore.

Unlike the other Les Pauls in Gibson's catalogue, these models feature simple 'Compensated Wraparound' bridges. Although basic, this reliable tried-and-trusted design feels solid and smooth under the right hand when palm-muting, with no jagged saddles digging into your picking hand.

For more information about Les Pauls, check out our related articles: