Tremolo is one of the oldest guitar effects around. Adding a pulsating warble to your guitar sound, the tremolo pedal is still popular with guitar players in the 21st Century. 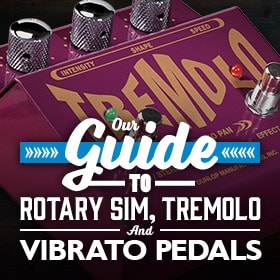 A tremolo pedal is a true pedalboard staple, adored for adding space and depth to chords. Tremolo pedals increase/decrease the volume of your signal at a steady rate, which can be controlled via a dedicated speed control. Crank it high, and you’ll achieve fast and choppy staccato-style sounds.

Originally built into old-school Fender Tremolux and Vibrolux amplifiers from the 50s and 60s, later amplifiers featured LFO-controlled optical tremolos for a smoother sound. A lot of current boutique-style amps still include this popular effect as standard, including Hamstead and Milkman amps. However, pedals make it far easier to attain that classic sound without having to buy a specific amplifier.

With many brands manufacturing their own tremolo pedals, the amount of choice available is better than ever before. Electro Harmonix are notable for their trem pedals, producing the feature-packed Super Pulsar; an ultra-versatile tremolo with tap tempo and stereo connections.

Modern pioneers such as EarthQuaker Devices and Chase Bliss Audio also make their own variants, the latter of which manufactures one of the best tremolo pedals around - the Gravitas. The Fulltone Supa Trem is another fantastic option, but if you're looking for an affordable tremolo pedal then the Mooer Trelicopter is a great shout.

Interested in finding out more about tremolo stompboxes? Read our Ultimate Guide To Guitar Tremolo & Vibrato!

What is a tremolo pedal?

A tremolo pedal works by increasing or decreasing the volume of your signal at a steady rate. This can then be altered using a speed control.

Where does a tremolo pedal go in the signal chain?

A tremolo pedal is best placed at the end of your signal chain as it will alter the volume of your overall signal.

How do you use a tremolo pedal?

All tremolo pedals will feature two controls: depth and speed. They form the backbone of the effect. Depth changes amplitude, while speed alters the incoming waves frequency. This speed value should be matched to the tempo of the song you're playing; if it isn't, you'll quickly find it sounds like you're performing out of time. Many modern tremolo pedals now contain tap tempo. This makes the process easier, allowing you to tap the switch in time with a song and let the pedal take over.