Fender is a legendary name in the guitar industry. Their world-famous instruments like the Stratocaster, Telecaster, Precision Bass & Jazz Bass, along with numerous game-changing amplifiers, have helped to shape contemporary music as we know it! 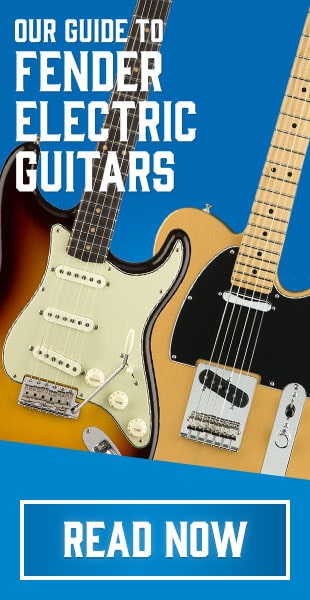 Not many companies have pioneered more iconic pieces of musical equipment than Fender. Founded by Leo Fender in 1946, the eponymous company was responsible for inventing the world’s first solid-body electric guitar (the Telecaster); one of the most culturally-important innovations of the 20th Century! In 1954, Fender introduced their “guitar of the future” — the Stratocaster. And once it got picked up by players like Buddy Holly, Jimi Hendrix and Eric Clapton, the rest was history!

Fender’s instantly-recognisable Tele & Strat electric guitars are known for their bright and vibrant sounds, with the former famous for producing a particularly “spanky” tone. This comes courtesy of their single-coil pickups and bolt-on constructions. Both models are highly-versatile, although the Telecaster is particularly popular among country players, while the Stratocaster is often wielded by blues and funk musicians.

Other renowned Fender instruments include the Jazzmaster, Jaguar and Mustang — all of which are commonly referred to as ‘offset’ guitars. These are great alternatives to the Strat and Tele, which ironically, were popularised by alternative rock bands of the late ‘80s and ‘90s!

Fender also conceived the electric bass in the ‘50s. Their stylish Precision Bass model remains a must-have instrument among bassists even today, with its bold-sounding split-coil pickup making it suitable for various styles. The Fender Jazz Bass, introduced in 1960, is another legendary bass design adored for its versatile dual-pickup configuration, slim playable neck and narrow string spacing.

What else are Fender responsible for innovating? You can add the modern-day guitar amp to the list! The sounds of their trend-setting amplifiers have been captured on countless illustrious records, with the Fender Bassman, Deluxe Reverb, Princeton and the Twin defining clean (and dirty) guitar tones for over 50 years. Heck, Fender’s Hot Rod Deluxe is one of the best-selling valve amps of all time!

Fender’s main USA factory, as well as their fabled Custom Shop division, are based in Corona, California. These are where their finest instruments are crafted, including those from the American Professional II, Ultra, Original and Performer series’. The brand also has a Mexican factory, which produces more affordable Fender lines like the Player and Vintera series’, while the Fender workshop in Japan mostly builds mid-priced, vintage-inspired instruments in limited quantities.