The definitive offset instrument, introduced in the late '50s - and still as radical as ever. 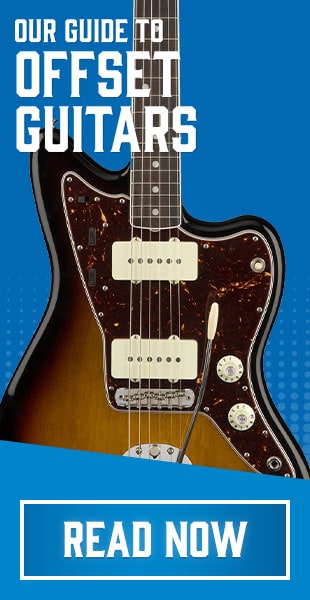 The Jazzmaster was released in the 1950s as a solid-body alternative for the upmarket jazz crowd. With fatter-sounding pickups and advanced switching, it offered a turbo-charged electric guitar experience.

It instead became popular among surf and rock guitarists, who fell for its punchier pickups and offset looks - radical at the time. The Jazzmaster ultimately became the alternative Fender guitar, for the players looking to stand out from the crowd and make a musical statement.

The most familiar Jazzmaster variety comes with oversized single-coil pickups, a vintage trem, lead and rhythm tone circuits and a 3-position pickup selector. Nowadays, however, the Jazzmaster comes in all shapes and sizes across both Fender and Squier's colourful line-ups. From affordable Classic Vibe to the all-singing all-dancing American Ultra - there's a Jazzmaster for every guitarist. Check out our full selection below!