Fender produce some of the worlds most iconic guitar and bass amps and have done so for many years. We stock a wide range of these brilliant Fender amps here at Andertons Music Co. 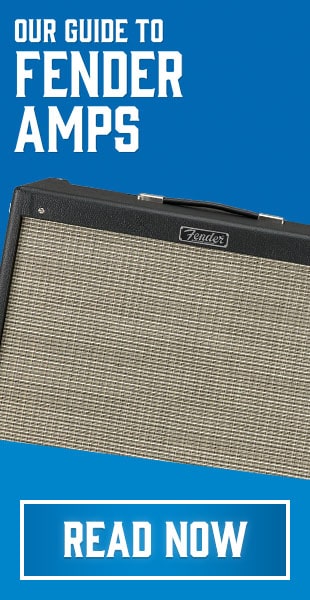 The Fender Amp range is quite simply, legendary. Their amps are well known for providing a wide range of tones and spawned the 'Blackface' and 'Tweed' sounds. Their reverb sounds have created whole genres on their own and these amps are widely used to this day. Fender amps have always been hard to beat and many, many companies have based their entire existence on copying some Fender amp designs.

Fender haven't just rested on their laurels in recent years. Their Hot Rod amp has been seen on stages all over the world for many years but they've continued to push boundaries with the release of their Bassbreaker amps which go for the higher gain market - something Fender haven't always been known for.

Fender have had success with their digital range called the Mustang range because of their accurate recreations of famous guitar tones. Their valve amps are loved the world over from the small but punchy Princeton amps to the bigger Twin Reverb, Hot Rod and Bassman models.

How much is a Fender amp?

What is a Fender Twin amp?

Fender Twin amps were first introduced in 1952 and are characterised by a clean tone. Since their inception, the model has been revised and updated, with notable models including the Twin Reverb and the Super Twin.

Is a Fender Bassman a guitar amp?

The Fender bassman is first and foremost a bass amplifier, however, many musicians do use it as an amplifier for their electric guitar.

What is the most popular Fender amp?

The most popular Fender amps are their Hot Rod Series. These affordable valve amp combos are their best-selling amplifiers.