Epiphone are the sister company to Gibson making more affordable versions of a lot of Gibson guitars but with their own range of archtops, semi-hollows and Les Pauls. Not just a knock-off company, Epiphone have their own rich history... 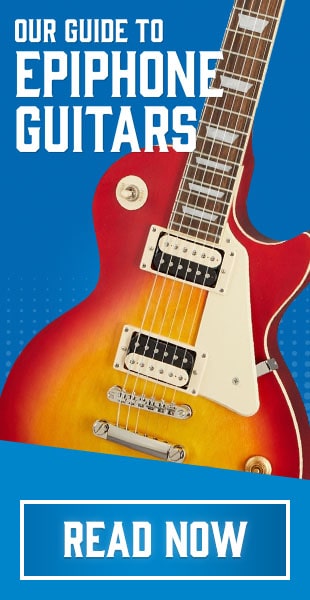 Epiphone are licensed to produce Epiphone Guitars using Gibson's extensive design knowledge. By combining years of history with modern production techniques, you can buy an Epiphone guitar that doesn't compromise on sound or playability at a very sensible price.

The Epiphone story goes way back to 1873 where founder, Anastasios Stathopoulos, started making his own fiddles and lutes in Turkey. Fast forward to World War I and they began making banjos. The company only started making their first guitars in 1928 and after a few more years relocated to America where it all took off for the Epiphone brand. Especially when the company was acquired by CMI who also owned Gibson.

The first Epiphone guitars were built alongside Gibson in a factory next door. This is why there are so many similarities between the instruments. Like the Gibson ES-335 and the Sheraton or the Epiphone Texan and the Gibson J-45. This is until they moved production to Japan in the 70s. In an ever-growing market, they then relocated to Korea but due to pollution laws had to shut down their factory. Which is why Gibson opened a factory in Qingdao, China which is where Epiphone guitars are now made.

The Epiphone range is vast across the acoustic and electric realm as well as their bass offering. And generally, if there’s a Gibson shape you like, you’ll be able to find a similar Epiphone at a more affordable price.

They have got many versions of the classic Les Paul including modernized versions with active pickups or more classic Les Pauls honouring the older Gibson guitars. As well as hollowbodies like the Sheraton, ES-339 and the Casino (which was actually the guitar used by John Lennon from The Beatles).

The acoustic range caters for players of all styles and abilities from beginner starter packs to the Masterbilt series for serious gigging musicians who want a guitar with a built-in pickup system for playing live, and everything in-between

Are Epiphone Guitars any good?

Is Epiphone made by Gibson?

Epiphone is owned by Gibson and make officially-licensed versions of Gibson guitars under the Epiphone name. Most Epiphones are made in their Chinese factory, but there are some Epiphone USA models made in Gibson's American facilities.

What is the difference between Epiphone and Gibson?

Gibson is the parent company of Epiphone. Gibson guitars are made in the USA, while Epiphone makes officially-licensed versions of their instruments in China. Epiphone guitars generally use more affordable pickups and hardware appointments, but some of the more expensive Epiphone models feature Gibson USA pickups.

Are Epiphone Guitars good for beginners?

Epiphone guitars are ideal for beginners as their instruments sound great and feel comfortable to play, while still being highly-affordable. With Gibson-inspired designs at a lower cost, Epiphone offer some of the best value for money around.