The Kemper Profiling Amp is easily one of the greatest guitar innovations of the last decade and continues to wow and impress even the hardiest tube amp enthusiast. 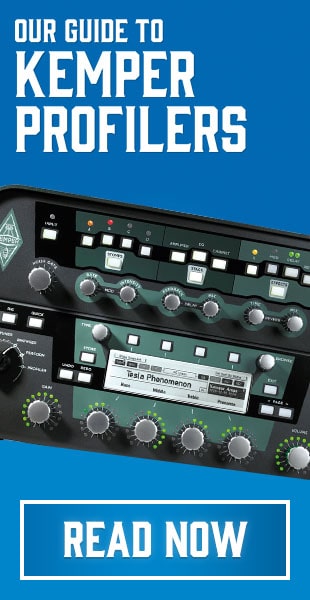 It’s an incredibly complex piece of technology that has blown the guitar world apart and has become a staple for studios, bedrooms and more importantly, big stages around the world.

Not only does the Kemper Profiling Amp recreate phenomenal amp sounds, but it also has a plethora of effects on-board including delays, reverbs, drives and modulations to make it the most versatile piece of guitar equipment on the planet. And most importantly, thanks to its powerful processors, it all sounds good.

The company that creates the Kemper Profiling Amp is the same company that is behind the Access Virus hardware synth which has cult status among synth fans thanks to its detailed effects and sounds that its capable of producing.

Though the profiling amp hasn’t been around for a long time, it has firmly claimed its place in guitar history by making it possible for users to have access to famous amplifiers at the flick of a switch.

There aren’t many variations of the Kemper Profiling Amp that you need to worry about. In fact, you can only really choose between having a non-power amp version or one with a power amp on-board. You can also get a version of the Kemper with the footswitch which allows you to change between patches and turn effects on and off with your feet.

They have also got a rack version and standard amp head style Kemper Profiling Amp available in either the power amp or non-powered version. The power amp Kemper allows you to plug directly into a passive guitar cab and disable the cab emulation so that you’re getting the same response as if you were just using the Kemper as an amp head. If you want this effect with the standard Kemper Profiler, you’ll need to use an external power amp. If you'd like to know which Kemper would work best for you, check out our Kemper Amp Guide - in the meantime, check out the range below!

What is a Kemper amp?

A Kemper Profiler is a digital guitar amp that uses a system of "profiling" in order to create accurate and dynamic emulations of real amplifiers. Kemper Profilers come with 200 built-in profiles, but you can download more or create your own.

How do you use a Kemper Amp?

Kempers can be used in a variety of applications, from direct output recording to live performance and home practice. The front panel consists of controls for signal chain, FX, navigation and EQ/amp controls. You can create a profile by hooking up your Kemper and a mic to capture the sound of your real amp - following the guided process.

A Kemper captures all the characteristics and responsiveness of the amp it's profiling, which gives it the most true-to-life feel of any digital amp on the market.

Is a Kemper worth it?

A Kemper is arguably the most innovative and effective way to recreate valve amp tone. While they are not cheap, the detail, accuracy, and amp-like responsiveness of a Kemper is practically unmatched.

Does a Kemper have effects?

Kemper amps have a variety of onboard effects including delays, reverbs, drives and modulations - with a total of 72 built-in effects.