Triple loyalty points on everything for a limited time only! For even more savings check out our Jan sale!

The word EQ is often bandied about within musical circles leaving observers dazed and confused. It isn’t a very difficult thing to understand but once understood, you’ll have a world of new ideas to try with your own guitar tone and in fact, music in general.

The EQ pedal is often called a utility pedal. Think of it as a tool to help you define, shape and mould your sound to achieve exactly what you hear in your head. With a bit of knowledge, this becomes easier than ever.

EQ affects how you sound within a band mix and can make or break your guitar sound. It also defines what your guitar sounds like so let’s have a look at the guitar EQ pedals available to help you shape your tone.

What is EQ anyway?

First off, let’s define what EQ actually stands for. When referenced, EQ means Equalizer or Equalization. It’s actually a scientific term that defines the spectrum of sound. It defines where certain sounds and frequencies sit on a universal spectrum.

You’ll probably be familiar with the three basic EQ terms which are Bass, Mids and Treble.

In music an equalizer is used to alter the frequency response of an audio system (or amplifier or speaker etc.) using linear filters. These simple filters can alter the sound of a song or your guitar in this case.

If you’d like a simple example of how it works, play a song that you know well through your hi-fi system or car radio. If you make drastic adjustments to the bass or treble you’ll immediately be able to hear what these filters change in the sound.

This same principle applies to guitar on it’s own. Bare in mind that any sound or signal source will have it’s own sonic imprint and therefore it’s own frequency output. This may sound incredibly confusing but in basic terms, a sound will put out it’s own frequency that can be recorded on a graph that will look something like this:

How does EQ affect a guitars tone?

As mentioned before, any sound (whether isolated or made by a number of sources like in a band) will form a sonic footprint. This sonic footprint is registered by our ears as one thing. How those different sources are put together will determine how it sounds to us.

This is actually what makes sound engineering such an art. They need to ensure that all of the different instruments occupy different space in the EQ spectrum so that they can be heard and don’t overpower each other or sound like mush.

This can be particularly tricky with guitars because these are very much mid-range focused instruments that can often compete with other instruments in the same spectrum like Saxophone, Vocals, Drum Toms and other guitars.

The mid-range frequency is often occupied by these instruments so you don’t want your guitar to be a) lost or b) too intrusive in the mix. You need to find that perfect little pocket of space and this can be achieved by using an EQ pedal to shape your turn and put it into that space.

How to use an EQ pedal

The EQ pedal should be used sparingly if you want it to be a utility pedal. It can be used to create certain ‘effects’ such as the AM radio tone like you might hear from The Strokes or for heavily scooped mids that might be heard on old Pantera records.

The advantage of an EQ is that it can make small, subtle changes that can perfect your tone or expand upon the range of sound that you’re already getting from your other pedals. Or you could simply set the pedal flat (Everything to 0) and use the gain control as a boost for guitar solos.

You could also use the EQ pedal to boost or subtract certain frequencies which is how you mould your sound.

Note: Don’t set up an EQ pedal in isolation if you’re playing in a band because the last thing you want is to find this beautiful, holy grail guitar tone with your EQ only to find that the minute the band kicks in, you disappear.

A note on Subtractive EQ

Subtractive EQ is a technique where you cut frequencies to make it appear like other frequencies have been boosted rather than boosting a frequency. For example if you had a flat EQ graph and subtracted the low bass frequencies and high treble frequencies, then your mid-range will appear more pronounced.

Why would I subtract rather than add/boost a frequency?

Unfortunately, when you boost or add a frequency you can introduce noise into your signal. Obviously no one wants hiss over their guitar tone. By subtracting frequencies to achieve the correct EQ, you’ll remove the risk of adding noise or hiss. 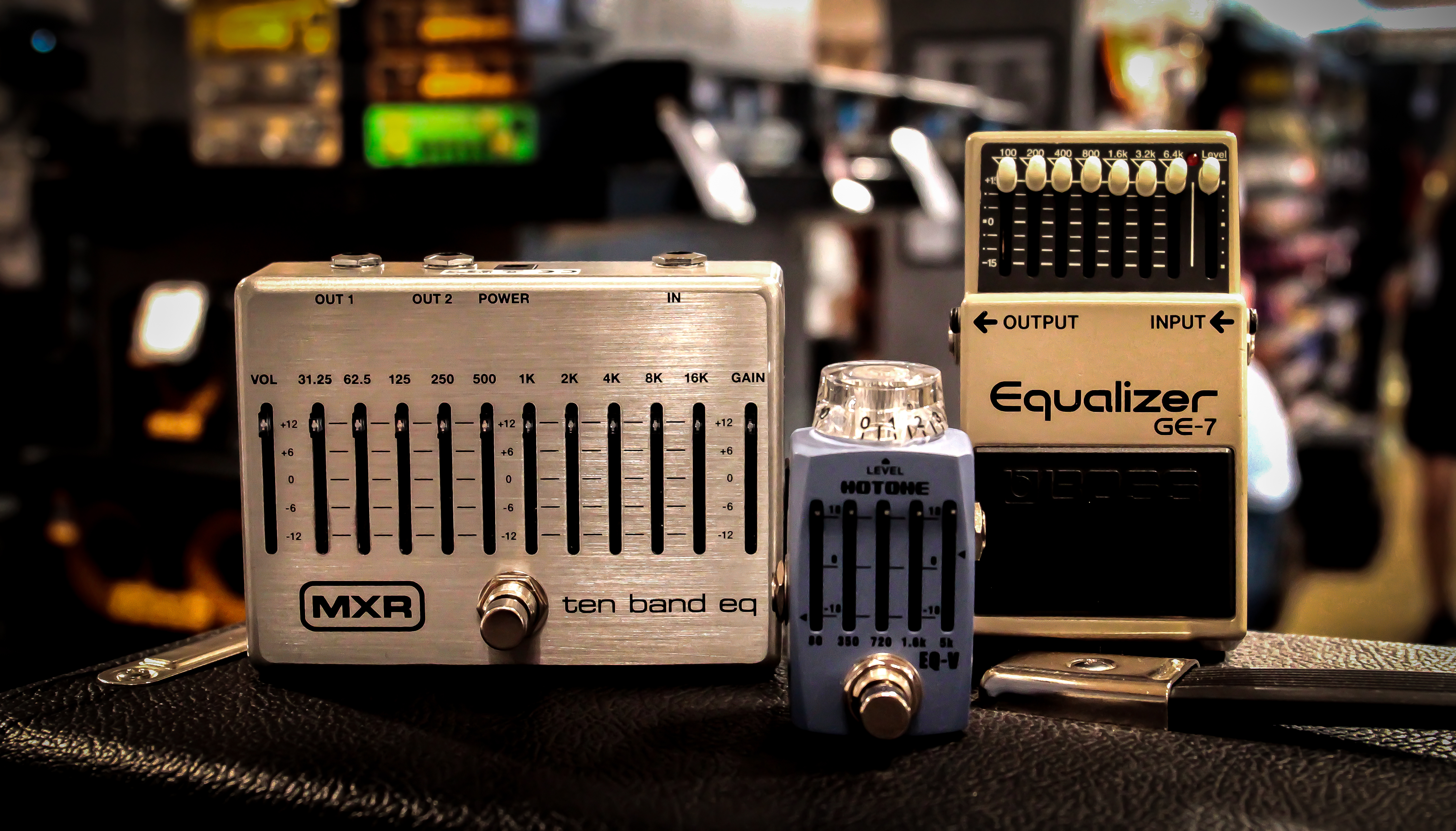 The Difference between multiple band EQs

7-Band EQ – Like the Boss GE-7 which is one of the most famous EQ pedals on the market.

Multiple band EQs differ in that they all give you different aspects of control. The fewer the bands, the wider the spectrum they control. This means, a ten-band EQ will give you laser precision whereas a 3-band EQ is more of a general sound. Both have their pros and cons but beginners would probably prefer the simplicity of a 3-band EQ.

Graphic EQs are quite easy to use because they give you a visual perspective of what your EQ looks like. Normally, they allow you to easily boost or remove certain frequencies and allow you to see what your EQ looks like as a whole. I'd recommend a graphic EQ if you're a control freak and want to know exactly what you're doing to your guitar signal to get it to sound a certain way. The Boss EQ pedal is a great example of a small, simple, but effective graphic EQ pedal. Another very popular graphic EQ is the MXR EQ pedal range - either the 10-band or the 6-Band.

Yes and no. Yes if you want more control over your signal. Often EQ pedals will have sliders rather than knobs and these can make it easier to visualise what your sound ‘looks’ like. You should also remember that amps will have EQ controls however they might be changing a broader range of frequencies and so an EQ pedal (Especially a 7-band or above) can help you hone in on those frequencies.

You can use both EQ’s in a few different ways.

The Best EQ pedals for guitar

It's always tough to choose a 'best list' but here are the best EQ pedals for guitar:

All of the the principles in this article apply to the acoustic guitar too. It can be a little bit trickier to get right because it’s a notoriously quiet instrument in a band mix and when performing solo or in a duo, the EQ will affect how ‘full’ your guitar sounds.

Some tips for getting a great EQ sound on guitar include:

The best EQ pedals for acoustic guitar are:

The EQ on a bass guitar will often make the biggest difference to how the bass sounds in the mix! This is why so many modern basses have got an active preamp on-board with an EQ so you can truly shape your tone for the band situation you’re in.

If you have a passive bass, you can (and should) still use an EQ pedal to make the most of your fat bass signal. It’s a good way to carve the tone you want and can easily remove woofy low-end or increase treble for a snappier sound. Perhaps remove the mids for a better slap tone!

Bass EQ pedals aren’t as common because generally, Bass DI boxes will have a powerful EQ built-in which saves you the hassle of having both. Boss make the GEB-7 which is a powerful, bass only EQ pedal if you do require just that. Other than that, you can use any EQ made for guitar to shape your bass tone.

EQ means Equalizer or Equalization. It’s actually a scientific term that defines the spectrum of sound. It defines where certain sounds and frequencies sit on a universal spectrum.

The low-pitched frequencies in the spectrum. Dominated by instruments like bass guitar and the kick drum.

The middle frequencies in the EQ spectrum. Here you will find instruments like guitar, vocals, saxophone, keys and pianos and many others.

The high-pitched frequencies in the EQ spectrum. Normally dominated by instruments like cymbals and the snare drum.

In a parametric equalizer, each filter cuts or boosts a range of frequencies. Each filter has three controls: frequency: the center of the frequency range to be cut or boosted. gain: the amount of boost or cut. Q: the "sharpness" of the boost or cut, with higher Q meaning a narrower filter

A graphic equalizer is a high-fidelity audio control that allows the user to see graphically and control individually a number of different frequency bands in a stereophonic system. A typical graphic equalizer consists of several audio filter/amplifiers, each centered at a specific frequency in the audio range.