MarkBass are a popular bass amplifier brand, with a large catalogue including amp heads, cabs and combos. Known for their vibrant yellow/black colour scheme, more importantly, it's the sound of their cutting-edge amplifiers that gets the most attention. 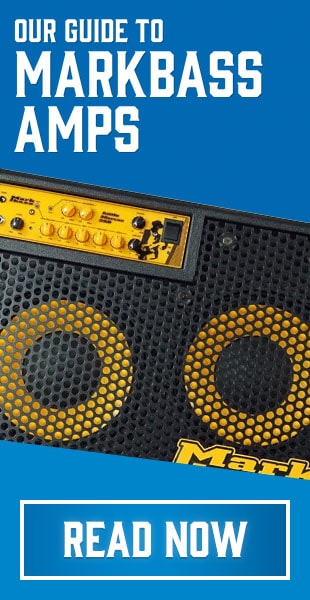 Catering for bassists of all budgets, MarkBass are known for using a combination of tube-powered and solid-state technology in their bass amps. Offering immense tonal flexibility and bullet-proof reliability, their amps are also regarded for their light weight and ergonomic portability.

MarkBass’ forward-thinking approach to bass amp design has caught the attention of some of the biggest names around, including the one and only Marcus Miller. Now boasting a signature range with the company, unveiled at NAMM 2018, MarkBass are quickly establishing themselves as class-leaders amongst their contemporaries.

Hearkening from Italy, MarkBass was founded by Marco De Virgiliis in 2001. After previous bass amp collaborations fell apart, it was with his MarkBass brand that things started to take a better turn.

An early success for the brand included pioneering the use of Neodymium speakers for its bass amp combos and cabinets. The use of these speakers and its material dramatically reduced their weight, and the brand gained critical acclaim for what became a game-changing idea. With many other brands following suit in subsequent years, Neodymium is now considered the industry standard.

Today, MarkBass’ lineup is more diverse than ever before, giving bassists plenty of choice when it comes to finding the perfect amplifier.

MarkBass’ Little Mark range is the most well-known from its catalogue, loved for its deceivingly compact enclosure - hiding a big sound. Now in its third generation, the Little Mark’s digital power amp gives a near-immediate response to notes, meaning that you can expect a detailed and tight sound that will cut through effortlessly in a mix.

Available with different wattages, including the 800, the Little Mark can fill the space of any venue whilst remaining clean when cranked up high. Featuring effects loops and line-outs, you can run modulation or time-based effects seamlessly through these versatile amplifiers, and even send their signals directly to a front-of-house PA system.

Tube-powered versions of this amp are also available, if a more traditional sound with some extra rich flavour suits you better.

A more recent range from MarkBass is their Ninja series. Boasting all of the features we have come to love from the Little Mark line, the Ninjas carry over a lot of their technology but on an even bigger scale - with 1000W of unbridled power!

All of that headroom without sacrificing the portable chassis that is so convenient, the Ninja series is for the stadium-playing pros. But if 1000W is way too much, the 102-250 is a 2x10” combo that still pumps out plenty of potent volume.

Marcus Miller is one of the most notorious names in the bass world. A legendary player with a dedicated following, Marcus Miller’s signature MarkBass amps give you his sound at an incredibly affordable price-point.