Guide to the Best Guitar Gear for Jazz

From a genre standpoint, jazz can seem fairly impenetrable looking in from the outside. And that's before we've even discussed the equipment and tone required for the job. To help out, we've outlined some of the best gear to ensure you're prepared for your jazz guitar journey! 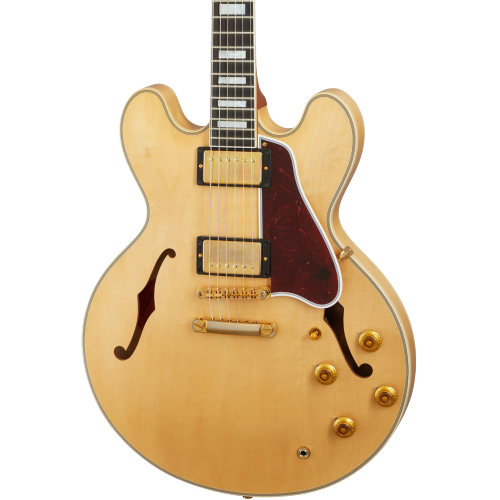 The History of Jazz Guitar

Jazz is one of the biggest genres around. Boasting a rich musical and cultural history - with roots that can be traced back as far as the late 1800s - jazz dominated popular music throughout the 20th century. However, it's fair to say that you might not immediately associate the electric guitar with the genre.

During the early days, the electric guitar was viewed as more of an accompanying instrument. Brass, woodwind and percussion dominated the jazz scene; guitar was initially used to compliment the brass section, providing a rhythmic structure that allowed these other instruments to shine.

It wasn't until 1923 that we saw one of the first electric guitars dedicated to jazz: the Gibson L5. This trailblazing instrument began to replace the banjo within jazz bands and orchestras thanks to a more versatile and pioneering style. The guitar was still under utilised though, and it would take a few more decades until the instrument rose to prominence.

Post-WW2 marked the first major change. This period signalled the emergence of the guitar within jazz due to the innovative players of the time. Django Reinhardt set a new precedent for what was possible with the instrument. He completely shifted the perception of the guitar thanks to his cutting-edge tunes like 'Djangology' and 'Minor Swing'.

Progress from then on was swift. The '70s further solidified jazz guitar as its own unique style, with legendary musicians like Pat Metheny and John McLaughlin marking it firmly on the musical map. It's gone from strength to strength ever since, with a strong modern scene developing across the world.

Ever since its inception, jazz guitar playing has been characterised by instantly recognisable features. From strange time signatures (usually performed over a solid bedrock provided by the rest of the band), to an entirely unique approach to both harmony and melody, the genre has carved out its own individual niche. And that's without even mentioning the most important element: improvisation. This is what makes jazz unpredictable and exciting; it allows the music to constantly evolve - especially in a live setting.

What gear will I need?

In this guide to the best gear for jazz guitar, we've put together some essential equipment that's designed to get you started with the genre. From hollow/semi-hollow body guitars, to valve combos, pedals and humbucker pickups, we take a look at just what you'll require for that smooth jazz sound!

The archtop guitar - or hollow body - is the preferred option for the majority of jazz musicians. When people think of jazz guitar and the quintessential, warm jazz tone, this is the first kind that springs to mind. Many of the genres biggest players have made it their axe of choice.

As their name suggests, these instruments are characterised by an eye-catching arched top and are formed from a hollow body. Their other main notable feature is the f-style holes. Located on both sides of the strings, these holes enhance the guitars overall projection, leading to a bolder sound with more presence.

These instruments boast a larger body (when compared to their solid-body counterparts), but they remain comfortable to use. And we haven't even said how good they look either!

A semi-hollow body guitar can be just as good as its hollow body cousin, but varies in a number of different areas. They're regarded as being more versatile, and are usually smaller than a hollow body, but still remain larger than a solid body model. They deliver a sharper, slightly less warm, mellow jazz tone/feel (with a more modern edge), but are known to suffer from less feedback problems than their hollow body brethren.

They contain a solid piece of wood than runs through the length of the body. This helps to minimise feedback, and promotes a precise, tight sound. Both of the bouts are then hollowed out - contributing to the semi-hollow design. This design ensures they better handle distorted sounds too, allowing you to mess around with the traditional jazz sound if you so choose.

While playing skill remains the focus of jazz guitar, tone comes a close second. And what helps define that tone? Amps of course. To get that clean, transparent sound we've already so often mentioned, you need an amp that's fit for the job. You're looking for something that remains warm and smooth, with excellent dynamic response. In our opinion, a valve combo is more than up to the task.

Valve combos - boasting enough headroom and offering clean volume - make an ideal option for the genre. They're regarded by many in the community as being the best kind of amp for jazz work. They deliver that rich, warm (yet clear) tone, with a level of response that's essential if you really want to nail the jazz sound. They are usually slightly heavier, pricier and require more regular upkeep though.

However, there are some jazz guitarists who actually prefer solid-state amps. Many deliver an equally good clean channel, with astounding clarity and natural, authentic tone to boot. Ultimately it's all down to your personal preferences, budget, and depends on what you're looking for in your rig.

Pickups are sometimes overlooked when it comes to achieving a desired sound. If you want to really nail a particular style (in this case jazz), then they're absolutely imperative. As you already know, pickups pick up (see what I did there) the vibration of your strings. This is then converted into a signal, which is then transferred to your speaker and turned into sound. Without the right ones, your instrument probably won't suit the genre you're looking to play.

But which kind are actually good for jazz I hear you cry? Well, you're probably going to want a set of humbucker pickups. The majority of jazz guitarists use humbuckers; they're favoured by current-day players, and were extremely popular with their predecessors too.

But why? Humbuckers are characterised by a warm sound that is a lot warmer than say, a single-coil pickup. They also have an enhanced dynamic range that helps set them apart. Both of these features contribute to that trademark jazz sound. Many benefit your overall clarity too, excelling with the clean tone that's favoured by the genre. There are even plenty available on the market that replicate the iconic designs, builds and sounds of a bygone era - with '50s and '60s sets available from leading brands, depending on your tonal preferences.

Many jazz guitarists recognise that the signature tone attributed to jazz guitar as a whole is rather understated. Ultimately, the playing style itself makes the sound what it is, as opposed to the other way around. However, that isn't to say certain threads don't run through most players' respective tones - those being that it's subtle, clean, warm, simple, mellow and transparent. Within the genre, pedals are used more as musical seasoning; they aren't heavily relied upon, and are instead used to provide your style with additional flavour and emotion when it's needed.

The most common pedals used are compressor, chorus and reverb variants - however many players augment their tone using delay and overdrive pedals too. We've outlined why each effect is important for jazz guitar below.....

If you're searching for a quick tonal solution then look no further. Our Jazz Pedalboard Bundle combines a selection of Tone City and Landlord FX pedals that are designed to get you started with the sound. This all-in-one setup packages together individual reverb, overdrive, chorus, compressor and tuner pedals - supported by the seriously robust Pedaltrain Nano pedalboard! Each pedal has been hand-selected to help achieve that subtle and warm jazz sound.

Enjoyed this? Why not check out some of our other related content below: