Squier are most well-known for producing cheaper versions of Fender guitars and basses. They are a great option if you want to buy a Fender instrument but at a more affordable price, still carrying the charm of their premium high-end counterparts. 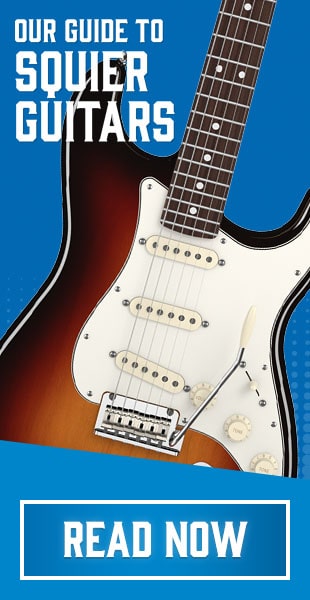 Despite some associating them as a “budget brand”, Squier have nevertheless established themselves as a provider of great quality instruments, played throughout the world by guitarists of all ages and abilities.

Since 1982, Fender has produced Squier electric guitars. With Fender facing strong competition from Japanese companies manufacturing inexpensive recreations of their guitars, Fender decided to make their own with the Squier name.

Initially made in Japan and offered to the Japanese market, these guitars eventually were sold throughout Europe and the United States. Production subsequently moved to other Asian countries such as China, South Korea and Indonesia to meet demand. Since then, the company have become one of the biggest mass producers of guitars and basses in the world.

Many guitarists and bassists would say their first instrument was a Squier. This is because they make amazing all-in-one starter packs for beginners, such as the Bullet series bundles which include everything you need to get playing. The Bullet series represents Squier's most affordable guitars and basses with prices starting at just over £100! This is the perfect place to start if you're looking for classic Fender designs on a tight budget.

The Affinity series is the next step up in the Squier range and includes all of Fender's classic models including the Stratocaster, Telecaster, Precision Bass and Jazz Bass and more! With upgraded electronics and hardware, the Affinity series remains one of Squier's most popular ranges.

Squier also make higher-spec instruments in other lines, with better components and a superior build-quality. One of these lines is the Classic Vibe range. Boasting classic Fender designs from the '50s, '60s and '70s, as well as a few oddities from Fender's colourful history, these guitars capture the old-school vibe of the golden era of guitar-building.