If you're after British sounding guitar amps then you'll find what you're looking for here at Andertons Music Co. Whilst all of the amps featured on this page may not be built in Britain, they're all proudly British brands! 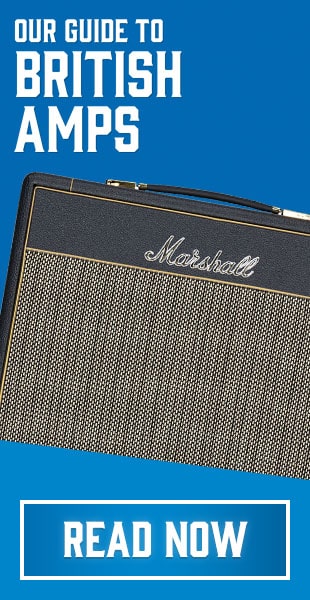 British-sounding amps are normally described as mid-range focused and slightly 'narrower' sounding than their American amp counterparts. Obviously there's loads of tonal variation from brand to brand but in general, British amps have a distinct sound.

Normally this distinction is made by the types of power amp used in the amps which greatly affects how they move the guitar speaker and the tonal response. British amps normally use EL34 or EL84 power amp valves which impacts how they sound. These power amp valves will compress and give you that saturated sound at lower volumes making them great for distorted guitar sounds. But it also gives your tone a specific sound when dialled between crunch and clean - just ask Jimi Hendrix.

When clean, they'll have a sweet almost bell-like top-end and when distorted they produce a bit more top-end fizz but this allows you to cut through the mix and blend with a bass player and drum kit really well.