Superior Drummer 3 is more than a drum production tool – it’s a virtual studio introducing endless possibilities for you to hone, shape and mould your drums without any thinkable creative restraints. Building on the legacy of its predecessor, Toontrack have redesigned it from the ground up to introduce a completely new and improved workflow, countless added features and an unequalled amount of raw sound material. With Superior Drummer 3, you are in total control.

Toontrack recorded SD3's vast 230GB library at Galaxy Studios in Belgium, a space famed for having only 14 dBA of environmental noise - literally one of the quietest recording spaces in the world! Renowned production guru George Massenburg combined perfect acoustics, unparalleled recording technology and a wealth of experience to make this one of the most comprehensive, detailed and expressive sample libraries ever released.

Toontrack have pulled out all of the stops with this release - compared to Superior Drummer 2, this is an entirely different beast! Here are the new features at a glance:

Superior Drummer 3 is your one-stop go-to drum plugin to nail pretty much any drum sound, groove or effect for your next track. Not only can you deep-edit the midi-tracks and nail authentic drum sounds - well frankly, some of the best drum sounds available to date - you can also mix them to taste.

With Superior Drummer 3, we have pushed the boundaries of what can be done with digital drum production.

THE COMPLETE DRUM PRODUCTION STUDIO.
Superior Drummer 3 is more than a drum production tool – it’s a virtual studio introducing endless possibilities for you to hone, shape and mold your drums without any thinkable creative restraints.

Building on the legacy of its predecessor, Superior Drummer 3 was redesigned from the ground up to introduce a completely new and improved workflow, countless added features and an unequalled amount of raw sound material. With Superior Drummer 3, you are in control. Welcome to the future of drum production.

IMMENSE AND IMMERSIVE, CAPTURED WITH LAYERS OF TECHNOLOGY

The Superior Drummer 3 core sound library was recorded by award-winning engineer George Massenburg at probably the world’s most quiet and ideal location for sampling, the Galaxy Studios in Belgium. The library boasts in excess of 230 GB of raw sound material captured in extreme detail.
In additional to close microphones and several ambience positions, the Superior Drummer 3 setup also includes an additional eleven room microphones set up in a surround configuration, for use in anything from stereo to 5.1, 9.1 and all the way up to 11.1 systems. In combination with the large selection of extra instruments added for stacking and sound design purposes, the sounds of Superior Drummer 3 give you an incomparable palette of options to craft drum tones beyond your wildest imagination.

The Superior Drummer 3 core sound library was recorded at Galaxy Studios in Belgium. With its 330 square meter room and eight meter ceiling height, it was the ideal location for capturing immersive audio of the utmost quality. In addition, the entire studio complex is built on springs to ensure
that the outside interference is literally nonexistent. In fact, with only 14 dBA of environmental noise, the main hall at Galaxy Studio is the most quiet recording space of this size in the world. Perfect acoustics, balanced reverberation and second-to-none recording technology. Superior Drummer 3 called for a superior studio. We’d dare to say that this is the most nuanced and candidly captured sample library on the market.

GROOVES. THE HEARTBEAT OF YOUR SONG.
New and improved features for finding, customizing and working with MIDI. From quickly getting a custom beat going to diving deep into fine-tuning timing and velocity detail, Superior Drummer 3 has got you covered.

The Midi Library
The Superior Drummer 3 MIDI library was designed to provide a wealth of fundamental groove and fill variations for mainstream pop, rock and singer-songwriter material. It also has a few dedicated sections for metal as well as an ‘Extras’ category with count-ins, snare rolls and MIDI files specifically designed for use with brushed samples. In total, the library encompasses in excess of 1,600 individually played fills, all categorized in common song structure parts.

Bleed
Otherwordly control over each microphone and instrument.

MIXER. CONTROL AND POWER, BEYOND THE THINKABLE.
The mixer introduces 35 low-footprint insert effects, making each channel strip a virtual sound processing powerhouse. Route, bus, send, saturate, blend and mix – the creative options are endless. With Superior Drummer 3, you are in control.

THE PRESETS.
To help you get started or to let you peek “under the hood” of how other engineers tweak their drums, we’ve included a comprehensive collection of mix-ready presets for a wide range of genres that you can use either as quick one-click solutions to get a great mix up or as a starting point from where you can venture off into your own sonic landscape.

We have worked with a wide range of our favorite producers – from local talent to some of the industry’s top names, like Bob Rock, Andy Sneap, George Massenburg and Richard Devine. Each engineer was given a blank slate and could create from the ground up, involving anything from their own custom samples to brand new field recordings of foley, one shots and percussion.

TRACKER. A NEW BREED OF AUDIO TO MIDI CONVERSION.
The Tracker introduces the arguably most efficient and accurate drum audio to MIDI conversion software on the market. Built on a highly advanced instrument recognition neural network, the Tracker detects hits with an unequalled accuracy and speed. With the seamless integration with Superior Drummer 3, replacing or augmenting drums has never been more powerful than now.

I finally bought this software and it did not disappoint. Very well recorded drums, vastly superior (pardon the pun) to the original DfH Superior product in my opinion. The excellent and flexible UI puts the full power of the recordings in the producer's hands, the customized grid editor allowing very expressive sequences to be programmed. My one strong wish would be for external inputs in the VSTi, to allow processing external sounds through the effects, but I'm not sure whether there are technical limitations.

Purchased to use with an e-drum kit for home use as an alternative to a drum module. Has good support for e-drums and sounds excellent out of the box. Support for positional sensing really improves the sound and feel of e-drums (I am using a Roland PD-128S mesh pad). Hi-hats sound great but require a lot of set-up to get right. I am getting great results with a Yamaha RHH-135 connected with an eDRUMin 10. There are many features in SD3 I may never use, but the quality and range of samples plus the dedicated support for e-drums makes it a worthwhile investment. 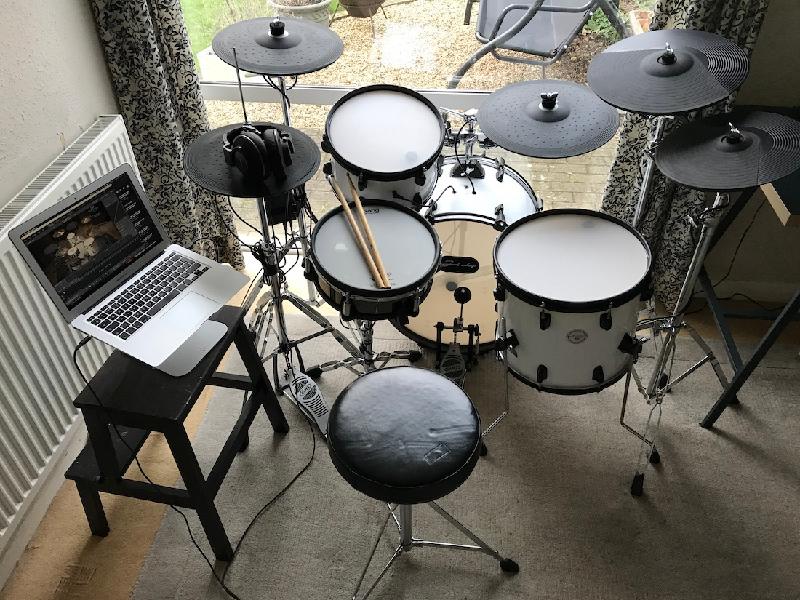 Good piece of software. Drum samples sound realistic in a mix and I like that Tracker can trigger samples from audio file.

Great service as always from Andertons. Superior Drummer 3 is one of the greatest pieces of music software ever released. This is easily the best software purchase I ever made after Presonus Studio One Pro, and is the best sounding and most intuitive drum sample software out there. Trust me, I have demo’d them all, some are close but this wins by some margin.

We will send you your download code shortly after you order.