The Digitech Trio is one of the best selling pedals we have ever had the pleasure of selling. What it does is listen a chord progression and comes up with a backing track containing bass and drums. This makes it an incredible practice and writing tool as you can focus on what you are playing and how it interacts in a band. Now they have added some new features with the Trio+ including SD storage and a synchronized looper!

Form A Trio
If you have played around with the Digitech Trio you know what to expect from the Trio+. While it is a bit bigger with a fair few new features the core Trio band creator is still there in full force. Just get it in to record mode and record the chords you want the band to follow. So simple to get the sound of a bassist and drummer through your amp with great consistency.

Looper
One of the biggest features that people asked for was the addition of a looper as this would allow them to layer guitar parts on top of the band. That...is exactly what they did. Synchronised to the beat of the drums the looper perfectly works in tandem with the Trio and makes sure that you don't fall out of time with a slightly longer loop on one side than the other.

SD Card Expansion
So this mainly makes use of the looping function. Through an 8GB micro SD card you can store up to 12 tracks with loops to play over. They have even included a memory card in the box so you can get creating and recording these songs for practice or even live performance instantly.

Here's what Digitech say about the Trio+

Like the original TRIO, the TRIO+ listens to what is played and automatically generates  bass and drum accompaniments that match the player's rhythmic feel and chord progressions. Users simply plug a guitar into the TRIO+, select the preferred genre, press the footswitch to teach the TRIO+ the chords and rhythm, then press the footswitch again to start playing with a customized

"The TRIO+ is borne entirely out of demands from the market after the TRIO was first introduced. We compiled a list of the top five most requested features and made them the priority for TRIO+ and I'm proud to say that we've incorporated all five into this irresistible new product. The new pedal includes a built-in synced looper, SD Memory Card expansion, and we've added an FX loop that provides improved operation with existing pedals," said Tom Cram, Marketing Manager, DigiTech. "Now, one musician can sound like a full band with one TRIO+ pedal. For solo artists, it adds a whole new dimension to their creativity and performance. This is a great tool for any musician who wants to write, practice or jam out with some excellent, always-ready accompaniment."

The DigiTech TRIO+ provides 12 musical genres to choose from including Rock, Pop, Country, Folk, Metal, Blues, R&B, Hip Hop, Latin, and Jazz. Up to 12 song styles are available for each genre and the player can select between 4/4 and 3/4 time signatures. The TRIO+ can learn up to five different song parts- verse, chorus and bridge, for example-which can then be recalled on the fly as the song plays back. Each part has the capability to be programmed for higher intensity, perfect for adding song dynamics when going into choruses and bridges.

The TRIO+ offers total control over the virtual band's performance. In addition to its Genre and Style selector knobs, the TRIO+'s Bass and Drums controls provide volume adjustment for both instruments and the Tempo knob locks in the groove. A Simple Bass button has been added and, when selected, this will force the TRIO+ to play a simplified bass line.

The Loop control adjusts the level of your recorded loop and overdubs in the mix. An integrated Micro SD card slot allows for up to 12 songs with loops to be stored to an included 8GB Micro SD card that can be connected via the guitar amplifier input and removed, as needed.

The Alt Time button selects an alternate half time or double time setting for each song part. The TRIO+ even provides a selection of built-in effects for your guitar that vary according to the genre selected, letting users play in a power trio, jazz trio or other ensemble at the touch of a button.

The TRIO+ can be connected to a guitar amp or directly into a mixer for use with a PA system. A headphone jack with level control is also included. An optional DigiTech FS3X footswitch can be connected to the TRIO+ for hands-free selection of song parts and styles. The TRIO+ comes with a power supply and its rugged, stage-worthy metal enclosure ensures reliable operation gig after gig.

Do it yourself band, for when you cannot gig together

GREAT PRODUCT. YOU CAN JAM/LOOP AND A GREAT BACKING BAND. WORTH EVERY PENNY

Really clever and fun piece of kit, makes practice and trying out new ideas so much more fun!

Only just started getting to grips with all the options on this pedal. It really is like having a backing band in a box!

Love this! I was after a decent Looper but this also creates your own 'band' too with drums and bass. You can use it to write and create your own songs and store 12 at a time. I find it easier than a standard looper as once you set the time, the looper automatically stops recording at that point. Its very quick and easy to build a full song with a backing band.

I haven't used all of the features as yet but so far I find the Trio+ an Absolutely Brilliant device. I used to have a beatbuddy but although it was good, it had nothing on the Trio+. So far this is my most favourite pedal and as a beginner, I find it invaluable. 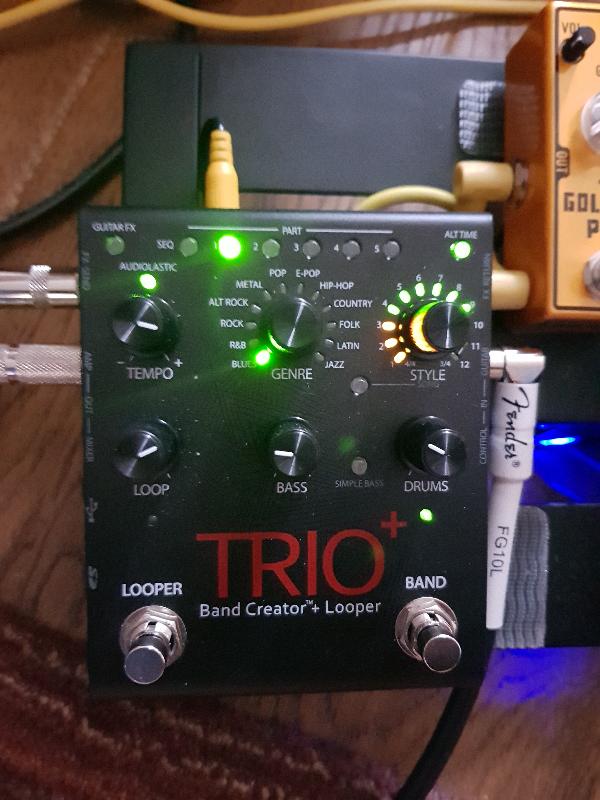 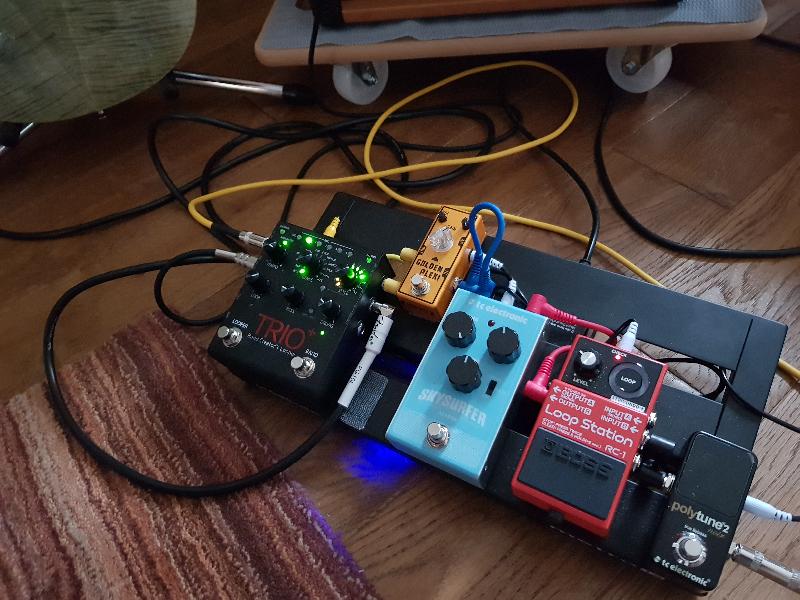 Fantastic practicing tool. Not just a looper, but a rhythm creator to play along with. Money well spent.

Takes a bit of getting used to, especially the tempo.

The Digitech Trio Plus pedal is an interesting, fun gadget.

This is the new must have pedal. It's awesome and make playing so much more fun when on your own.

Good. Works very well. Haven't tried all features as yet

I had the original Trio and loved it but always felt it'd be better if it had a looper .... now it has! Great stuff.

Great practice tool ,watch a video it tells you more than me writing 25 characters.

Just what the doctor ordered.

The trio+ is a lot of fun,the added looper is a big bonus. Great for Practice.highly recommended

Great for solo jamming and to practice with. Programme a simple chord sequence then switch from genres and practice licks, scales, experiment with melody ideas etc. Makes practicing great fun even when repeating forms to train muscle memory. Really good selection of genres and styles that you can mix up with different intensities for drum and bass. Keep the chord sequence for training as simple as you can. Trying to get too complicated will confuse the Trio and you will end up with somewhat ugly jumpy bass lines. Once you have used a simple sequence to train it, you can use your more compels arrangement in the looper. If you end up sticking with a genre, you will start to notice some repetition and things can start to sound a bit samey. Simply switch genre and style, use the alternate timing button and change intensity.

Brilliant piece of kit, great for practice and very easy to use, I would recommend this product