Fuzz pedals are perfect for guitar players who love gnarly, raucous tones! With many different types available, our diverse selection will have all of your fuzzy needs covered. 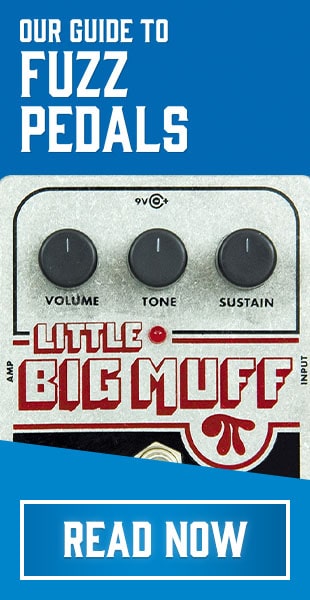 There aren’t many pedals that sound as dramatic as a fuzz! Belonging to the same family as overdrive and distortion stompboxes, fuzz pedals generally have a grittier and more raspy tone than their close cousins and are favoured by players who love to make their riffs sound particularly huge!

Early '60s fuzz pedals used germanium transistors which are known to produce warm, mid-focused and “vintage” tones. While germanium-based fuzzes are still manufactured, silicon fuzz pedals are considered the norm these days. As a more reliable alternative, silicon transistors provide better longevity and consistency; offering up a brighter tone with more gain and saturation to boot. You can also get octavia pedals, which are basically hybrids of fuzz and octave effects — perfect for really thickening up the sound of riffs or solos!

There are many renowned fuzz pedals out there, but none are more famous than the Electro-Harmonix Big Muff Pi. Producing an engulfing wall of sound rich with saturation, this famous design hit its peak of popularity in the ‘90s when The Smashing Pumpkins used it on their hit album “Siamese Dream”. Many iterations of this circuit exist, including the space-saving Little Big Muff and the Russian-inspired versions — which typically produce boomier lows. The Jim Dunlop Fuzz Face is another notable mention, made famous by Jimi Hendrix back in the late ‘60s. With a bold mid-range, these fuzz boxes possess a spittier tone with a lot of dynamic range and articulation.

Want to find out even more about these high-gain wonders? Take a look at our Ultimate Guide to Fuzz Pedals!

What's the difference between a Silicon and Germanium Fuzz Pedal?

What fuzz pedal did Jimi Hendrix use?

Where should I put a Fuzz Pedal in a guitar signal chain?

Fuzz pedals tend to work best when placed as early in the effects chain as you can, before or after wah and overdrive pedals, but you can experiment with fuzz placement for different sounds.