The Kraken can be fitted with either 6L6 or EL34 output tubes - it’s simple to switch the output valves in this amp, although for optimum performance & valve life you should get an amp engineer to re-bias the amp every time you change the output valves. In the original tone testing of the Kraken (that included Martin Kidd & Rabea Massaad) it was agreed that 6L6s gave the tone we were looking for, & so the “regular” Kraken comes with these valves fitted as standard. However, if you think you’d prefer the Kraken fitted with EL34s you can order that as standard if you want. It should be noted that in Rabeas stereo Kraken set up (which is without doubt the most crushing guitar tone we’ve ever heard!) he uses EL34s in the amp he sets to channel 1 & 6L6s in the amp he sets to channel 2.

Sorry, we have to do it.... RELEASE THE KRAKEN!!!!!!. Victory have made some great amps over the years and have built up a reputation for high quality, tone rich heads that deliver a truly stunning range of sounds. The new Kraken head is, like its namesake, a real monster.

Similar to it's more refined sibling the Countess the Kraken is a portable, 2 channel head but you wont find a subtle clean channel here. Instead the Kraken presents you with 2 gain channels, 1 based on British tones and the other on American sounds. If you like your metal heavy this amp is for you.

While a lot of amplifiers will offer you a clean and crunch channels very few offer you just two high gain crunchy overdrive channels. If you play rock or metal the clean channel may be completely useless to you so why not replace that with another gain stage so you can free up your pedalboard of all of those pesky drive pedals.

This version of the Victory VX comes as standard with a set of 6L6 power amp tubes. You are not stuck with these for life though as you can easily change out the 6L6 tubes for EL34 at any time as long as you bias the amp after changing over. The differences between these tubes are subtle but noticeable in the feel to the player.

50w is a lot of power but it is often needed at medium to larger size venues to even be heard when mic'ed up. When you are at home however that can just be overkill. Victory know that you don't always need 50w so you can switch the Kraken down to 15w, 9w or even 2w of power for use at home, in the studio or on smaller stages.

So many artists that play prog metal, djent or similar genres are using extended range guitars. Whether that is 7, 8 or even 9 strings the Kraken has a trick up its sleeve to make sure you never get flabby low end again.

With a flip of the Bass Focus knob you go from a tight and focused low end that works great with extra low tunings to a looser lower end perfect for grungy American metal tones.

"For the VX to pack such a powerful punch from such a small package makes it one of, if not the best metal amp we have ever played through."

"To all extended range players: Consider yourself well and truly catered for. Unleash The Kraken, indeed!"

"6L6 - The 6L6 Loaded Kraken has a little more warmth in the low end, and has a slightly smoother/sweeter top end which is great for singing leads. The mid range is barky and aggressive with a powerful punch. This configuration lends itself to anything between warm, pushed clean/crunch tones, through to powerful and chunky rhythm tones.

EL34 - The EL34 Loaded Kraken has a powerful and cutting mid and high range, with a controlled low end. Gain 1 gives you a classic British crunch to enjoyable high gain tones, whereas gain 2 gives you soaring lead tones, a biting mid range and a solid low end.

Here's what Victory have to say about the Kraken

Victory Amplification from the UK proudly announces VX The Kraken, a 50-watt box of glorious gain tones for hard rock, metal, extended-range and progressive players.
Forget clean sounds: our latest all-valve compact head starts with crunching rhythm tones, and sears on to all the gain you’ll ever need. You can use it at home, on stage or in the studio: VX The Kraken will even travel as hand luggage when you fly.

Shared across both gain modes, but optimised for each

Footswitch between two master volume levels at any time

Much more than a bass EQ, this changes the negative feedback in the power amp, offering tighter, more focussed low end, or more loose and resonant

Switch down to single-ended mode (from full power, push-pull) to use just one output valve for lower output, more compression and different playing dynamics

Bias switch enables use of either tube type. (For best results, the amp should be biased by a tech with any output valve change)

For players who like to run effects in a loop rather than into the front of the amp. Footswitchable on/off

Fantastic amp, very versatile. Gain 1 cleans up a lot more than expected, gain 2 is very usable not just for metal, very portable too which is great

I have owned loads of different amps - Framus Cobra, Rivera K-tre, peavey 6505, Masotti X100m, EVH 5150 iii Lbx. This amp just does all I need but it does it better than any of the previous amps I had. I play mostly metal and this little and light thing just smash it. Two different tones that can be used to cover all the possible music styles: and no need to lot of tweaking. It won’t give you a sparkling clean but you’ll get that dirty bitty clean that I love. If you like a tight modern sounding amp, you'll Never be disappointed. 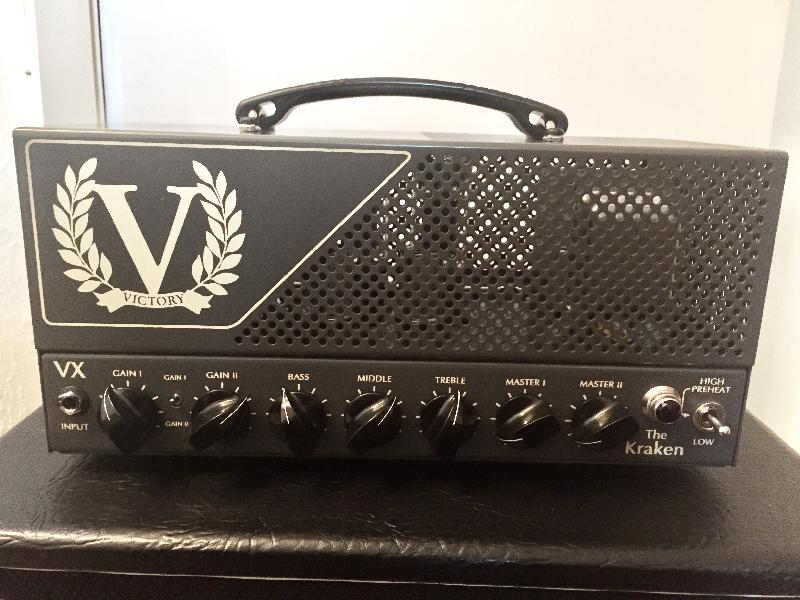 Superb amp with tone, tone, tone and gain gain gain in abundance. Martin Kidd does it again. Fantastic amp, and so portable. Beyond impreseede with it.

Awesome bit of kit! Expensive but a quality bit of kit

This is an absolute monster of and amp. Sounds fantastic. With some adjustment of your volume knobs on the guitar this amp will happily do clean tones (I play alot of pink Floyd stuff at home) right through to screaming lead solo and heavy power chord chugs. Spend the time to try one out. Superb amp.

Took some time to get a power cable for it as Andertons sent the british version to me in Sweden. Great amp but at that price I guess they could offer some better help.

Wow!! One issue: the amps feet are to small, so it doesnt sit nicely on a cab with the handle on top

Staff were great, very knowledgeable, helpful and friendly ! The VX Kraken is a lovely bit of kit, Im very happy with it.

Stunning tones. The real surprise is the flexibility of this amp. Warm cleans? Yes. Stunning Classic Rock tones? Oh Yes. Modern high gain lunacy? By the bucket load. Tiny footprint, monster sound. Because of the ability to lower wattage outputs using the Low setting and the single ended mode - also usable tones for any setting. That 50W setting is a true monster though.

We can special order this from our supplier

This item is out of stock. We can special order this item from our supplier.