We stock a wide selection of solid state and digital amps to suit a wide variety of needs; from practice amps for beginners, reliable combos for gigging musicians to high end Kemper digital amp simulation... See our full range below 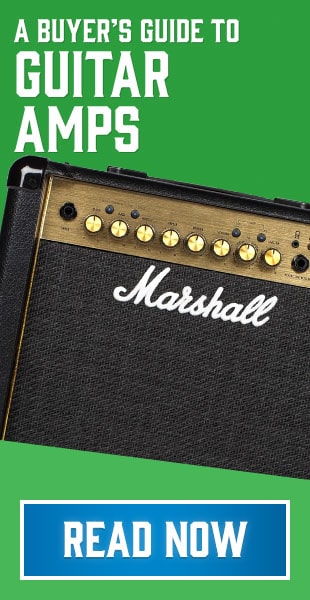 Whilst more than a few guitarist purists will turn their noses up at solid state amps and their digital counterparts, these valve-less amps continue to be a massive part of  our guitar heritage for a number of distinct reasons.

Unless you were VERY lucky, nearly all of us started their guitar playing using a solid state or digital practice amp. They're more cost effective, easier to look after and often come with a number of handy extra features that play a huge part when first learning guitar. Solid state amps often come with multiple channels, a number of built in effects and the ability to connect your music device so you can jam along to your own tracks. Some even have headphone outs so that you can practice silently in your room without bothering your family/housemates or neighbours when you play. Some favourites include the Marshall MG series, Yamaha THR and the Fender Mustang and Champion series'.

The rise in digital amps has led to even more features and bang for your buck. Line 6 was one of the first companies to do this, with their Spider amp series that offered not only a wide range of effects but also a choice of switchable amp model simulations going from clean to crunch and even metal.

Another great thing about Solid-state amps are that they are a lot lighter and much more reliable, particularly for gigging musicians constantly lugging their gear around from gig to gig. The Roland Cube series has been a staple for buskers thanks to its indestructible design and  feature set, but there have since been a wide range of options from Blackstar, Yamaha, Boss, Vox and more.

Quite a few guitarists like Radiohead's Johnny Greenwood and Andy Summers from the police have sworn by solid state amps for their guitar tones,  One of the most famous of these is the Roland Jazz Chorus, which has been revered by all for its glistening clean tones and built-in stereo Chorus.

Companies Like Roland continue to innovate, bringing the quality and performance closer and closer to the level of that revered amp break up with their Blues Cube series.

What is a solid state amp?

These amps utilise a transistor circuit which then converts your incoming electrical signal to a sound wave. Between the preamp stage (at the start of this circuit) and the power amp stage (found at the very end), your sound can be altered using effects like reverb, EQ etc.

Is a tube amp louder than a solid state amp?

No, they're not. However, the perception is that they are. This is because of headroom - each amp manages power differently. Tube amps clip gradually (heading into overdrive terrirtory as you increase volume), meaning your amp can be cranked up to the max, yet still sound great. With solid-state amps, you can only turn them up to a particular level (while maintaining clarity), before their sound starts to distort and becomes unusable.

What is the difference between solid-state amps and tube amps?