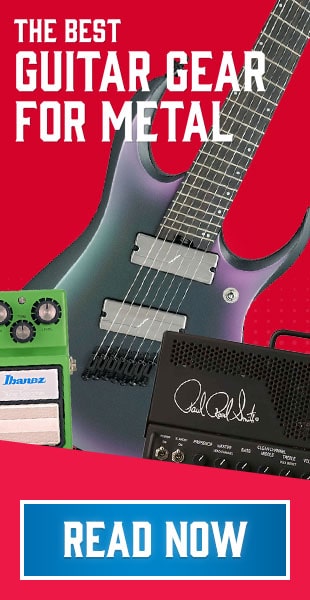 When 7 string guitars first became available in the 1990s, thanks in part to Ibanez's signature Universe model for guitar virtuoso Steve Vai, they quickly found popularity with metal players in particular. Bands like Korn and Fear Factory took full advantage of their low B strings to form heavier styles than their contemporaries.

Today, 7 string guitars are no longer seen as gimmicky or obscure, and are largely accepted by the guitar community. Dozens of famous guitarists and modern bands rely on them, including John Petrucci (Dream Theater) and Periphery players Misha Mansoor, Jake Bowen and Mark Holcomb.

Of course, Ibanez aren't still the sole mass-manufacturer of 7 string guitars. Brands like Schecter, Chapman Guitars, Jackson and PRS have joined the club, catering for guitarists that are keen to push the boundaries of traditional guitar music.

7 string guitars proved to break the mould, but bands soon started to even tune them down in order to attain deeper, bass-like tones. Meshuggah experimented with lower 7 string tunings on their 2002 album Nothing, and soon after Ibanez produced custom 8-string models for them.

With a low F#, 8-string guitars are much more akin to a bass and can truly shake the earth with their ultra-low sounds. It's also worth noting that 8 string guitars typically feature longer scale lengths than traditional guitars. This is to ensure that string tension is optimal on the low F# and B strings, so that notes stay in tune and are intonated more accurately.

8 strings guitars already seemed to be the limit, but of course, someone had to go one further! 9 string guitars broaden the sonic range even more, with a thunderous low C#. This means that the standard tuning of a 9 string guitar goes even lower than a 4 string bass!