All the way from down under, Cole Clark crafts some of the finest acoustic guitars currently available on the market. As masters of electro-acoustic technology, their innovative instruments are practically designed to be plugged in!

Andertons Music Co. is delighted to be stocking Australian-made Cole Clark acoustic guitars. We are carrying models from their 3 flagship instrument ranges: Angel, Fat Lady and Little Lady. You can click on the tiles below to browse the instruments from these series’, or scroll further down to learn about Cole Clark's history, ethos and the unique features found on their guitars. 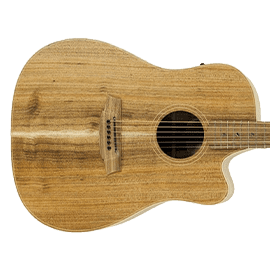 Founded in 2001, Cole Clark is an Australian guitar company that specialises in the production of electro-acoustic instruments. The brand takes great pride in its guitars, which are crafted predominantly from tonewoods indigenous to their native Australia. Environmental protection is a huge part of the brand’s ethos, with around 85% of its models made from 100% sustainable materials.

Apart from their admirable ethical values, it is Cole Clark's unique approach to building guitars that makes their models so interesting and appealing. Boasting a tasteful mix of original and classic design features, such as a patented 3-way pickup system, a unique integral neck construction and a traditional Spanish heel joint; Cole Clark guitars truly stand out from the crowd.

The features listed below are found on almost all Cole Clark models. Not only are these guitars crafted by expert luthiers in Australia using a mixture of modern and traditional construction techniques, but they also come equipped with only the finest electronics and hardware too:

At the heart of all Cole Clark electro-acoustic guitars is a patented and highly-innovative 3-way pickup system. Using a combination of six under-saddle piezos, a body face sensor and a built-in condenser microphone; the elements from this system work in perfect harmony to produce a superbly natural acoustic tone when amplified through a connected PA system.

The beauty of Cole Clark's 3-way pickup design is that it successfully eliminates the unnatural 'quack' that afflicts most electro-acoustic guitars. That's because each element only captures the frequencies that they're best equipped to handle. The piezos suspended under the bridge take care of the resonant lows, while the face sensor and integrated condenser microphone capture the mids and highs respectively. These are then blended together to form a full and authentic acoustic sound.

Flexibility is another key benefit of the Cole Clark 3-way pickup system. Not only can you control the output of each element to find the ideal sonic balance, but you can also use the built-in 3-band EQ section to tailor the bass, middle and treble frequencies. So whatever the space or venue you're playing a Cole Clark guitar in, you can always tweak your tone to perfection!

Sustainability is a huge part of Cole Clark's ethos. That's why the brand constructs most of its instruments from woods of flourishing tree species' that are indigenous to Australia - where the brand builds all of its guitars. As these are fairly unconventional timbers, we've put together a short guide that explains the physical and tonal properties of Cole Clark's most common tonewoods.

Blackwood is used in the construction of many Cole Clark guitars. Commonly employed as a body back/side material, selected Cole Clark models will also feature Blackwood tops for a uniform look. It is the stiffest timber that the company uses, and although it has a unique character of its own, many liken it to Koa and Mahogany for its rich low-end sound and sweet articulate highs.

Cole Clark uses Queensland Maple in the vast majority of its instruments, typically as a neck material. The brand also employs it as a body back/side wood, as an alternative to Blackwood. Queensland Maple doesn't share the overly-bright sound characteristics of US Maple, but has more of a neutral tone akin to South American Mahogany - with a touch of upper mid-range snap.

Bunya is the most common body top wood used by Cole Clark. It is considered as a key ingredient of Cole Clark's "signature" sound, but is comparable to Spruce both sonically and aestehtically. Solid Bunya is also a durable material, meaning that percussive players can enjoy its robust feel and quick tonal response.

An American wood species grown in Australia; Californian Redwood is a sustainable material used by Cole Clark to form the body tops of selected models. Redwood is quite stiff and rigid, but is nevertheless regarded as a resonant timber that is ideal for both finger-pickers and strummers. It delivers a crisp and punchy top-end with sweet overtones.

Introduced in 2003, the Fat Lady series is the oldest in Cole Clark’s catalogue. Featuring a number of bombastic Dreadnought-style acoustic guitars, these instruments project loudly and have a punchy mid-range character; making them a great choice for singer-songwriters.

Cole Clark’s Little Lady series comprises several mini, travel-sized acoustic guitars. Instead of simply shrinking down one of their existing body shapes, as we've seen other manufacturers do, Cole Clark designed a distinctive and practical body shape for its Little Lady models to ensure that they sound bigger and better than the competition.

For more information on Cole Clark guitars or the topics covered in this piece, check out our related articles: