The boss Katana KTN-100 is a bedroom practice amp on steroids! It has enough power to be gigged with because of its power scaling function (from 100w to 50w to 0.5w) with loads of cool effects, programmable presets and a few different amp styles. It also has a small 5" speaker so even when the head isn't connected to a cab you can use it for low volume practice.

The amp has got 5 different amp styles that you can choose from:

So once you have chosen your amp sound and set your EQ (Bass, Middle, Treble) you can choose the effects you want to run. The amp has got effects on board but you also have access to 55 other effects through the BOSS tone studio app. You can connect your amp to your computer via USB and then upload the specific effect you want on the amp and save it as a preset. A maximum of 3 effects can run simultaneously but you can choose what those effects will be. If you want simple drive, chorus and reverb you can do so. But if you want to be more experimental by combining ring mod with a slicer then you can set that up with the Tone Studio.

It has 4 memory slots for you to save you favourite sounds and quickly recall them. For example, you could load up a mild rhythm overdrive on tone slot 1 and a screaming lead with loads of delay on tone slot 2 etc. This amp has 2 more slots than its little brother the Katana KTN50.

If you want to use a foot controller to switch between your favourite sounds, the Boss GA-FC can act as a channel switcher and the amp takes your pedals really well too.

The power scaling is an idea borrowed from the Katanas Blues Cube brother where you choose if you want the amp to run at 100w for full volume and power or down to 0.5w for late night bedroom use. It makes the amp really useful if you want 1 unit that can do band practices, as well use it at home without waking the neighbours. And you can run it with any type of guitar cab so if you need it for a hard rock show with a 4x12 cab, then the Katana will cut through any mix.

If you decide that scaling the power down isn't quite enough, you can also plug in a pair of headphones for practice or use the small 5" speaker that's built-in to the amp.

One the great things about the Boss Katana amps is that compatible Katana amps can be updated by simply connecting the amp to your computer to unlock a whole host of new features!
Version 3 sees the Katana range get 3 new effect types that work brilliantly with any of the Katanas five amp characters but with extra ‘tonal magic’ when used with the Brown channels harmonically rich voicing.

You can now record with stereo effects which means your delays can ping pong from left to right and modulations and reverbs will feel that much wider and more authentic.

The v3 update allows you to assign your favourite parameters to the front-panel effects knobs giving you huge control over your effects on the fly! And you can control specific effects parameters using up to 3 expression pedals via the rear panel and optional GA-FC foot controller!

This amp now has the Katana Version 2 software installed!

All Katana amps include integrated access to a wide selection of BOSS effects, which are customizable using the free BOSS Tone Studio editor software. Version 2 adds SDE-3000 delay, Phaser 90E, and Flanger 117E effect types, bringing the total number of available effects to 58. The three new selections are based on effects used to create some of rock’s most famous guitar sounds and are a perfect match for the Katana’s high-gain Brown channel tones.

One of the Katana’s most powerful features is the ability to store favorite amp channel and effects setups in Tone Setting memories for instant recall. The Version 2 update adds a second bank of Tone Settings, doubling the number of available memories. Combined with the newly added channel and global parametric EQs, this elevates the Katana’s performance versatility to even higher levels. Users can switch between the two banks from a panel button or an optional external footswitch.

Version 2 also enhances the Katana’s Reverb section, allowing it to be used for delay or delay-plus-reverb in addition to reverb alone. And on Katana amp models that include an effects loop, the send/return capabilities have been expanded for greater flexibility when inserting external processing in the signal path. All of these features are easily configurable using the BOSS Tone Studio software.

A standout characteristic of every Katana amp is the dynamic interaction between its output section and the speaker, which provides a highly responsive tone and feel that players love. With the new Cabinet Resonance function derived from the flagship Waza amps, users can now shape this interaction with three selectable resonance types. Katana amps also offer line and USB outputs with speaker cabinet simulation, and Version 2 enhances this capability with three Air Feel settings inherited from the Waza series.

Upgraded from a spider 3 amp and can’t praise this enough. Modelling amps have come a long way, sounds difference is night and day. The ability to change the settings via tone room on a PC is exceptional as it gives you access to so many pedal sounds!

My last amp was my first amp, a Blackstar ID Core 40 V1. I'm not that technical or knowledgeable but I'm able to achieve so much more using the Katana and the Tone Central software that I do not need to use any of my pedals to achieve the tone I want. It might sound like an exaggeration but for an amateur like myself, I am using an overdrive boost, 10-band EQ and set the bass, middle and treble to shape the tone so nicely, all within the software, and saving my tones to any one of the 8 banks in the amp. It even has a built in noise suppressor that works really well (like the NS-2). You can set the boost, EQ and effects in different orders in the signal chain but I wish it had more of these options (my only gripe so far), for example a place to put the noise suppressor and the individual effects like how the GT1000 does it. Regardless, sounds amazing even out of the box but is a whole different beast when you start messing with the equaliser. 5w mode is perfect for bedroom practice, and you can cut through drums in 50w if you want to. Take the head off the cab and the 5w speaker sounds good also. Can't be happier with my purchase.

Incredible amp for the money

Versatile, well built and with a multitude of great tones available at all volumes!!

I've used it with a strat, acoustic and a baritone all of which work well

Fantastic sounds and incredibly flexible, especially when you pair it with the external software to create your own libraries of tones. Also incredibly useful to have the in-built speakers for use as a practice amp, makes it the best of both worlds.

Such a versatile amp! Been using for a couple of weeks and it continues to impress me. I don’t have room for a cab where I live, so the internal speaker is a life saver when it comes to practice at home.

This head is incredible for the price. I am not getting any younger and wanted a lightweight setup, but with great tone. After some help from Will at Andertons, I decided on a pair of Orange PPC112 Cabs to go with the Katana. The rig looks Mini Stacktastic and I can use the head with one or both of the cabs for great flexibilty. It is LOUD with both. I play mainly pub gigs and it rocks on the 50W setting easily. If you're gigging, you will want the Roland GAFC Footswitch - it makes this beast a Monster. 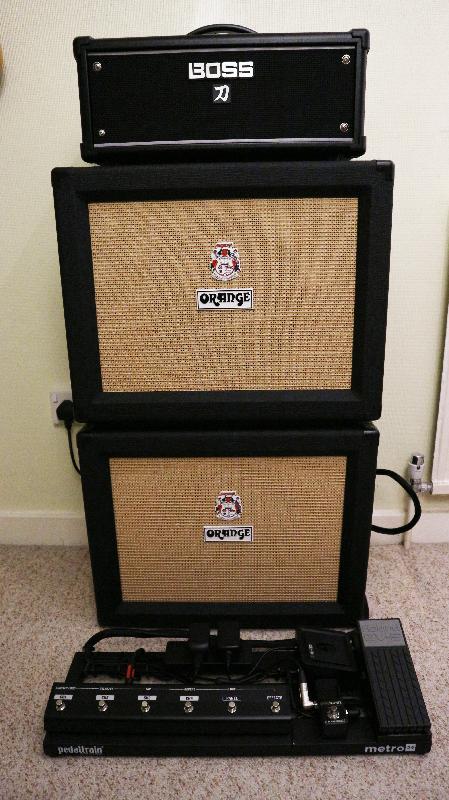 We can special order this item from our supplier