Modelling amps are the future of guitar and bass amplifiers. These ‘amps’ or often multi-fx units can provide you with a wealth of incredible guitar tones that are easier than ever before to attain. 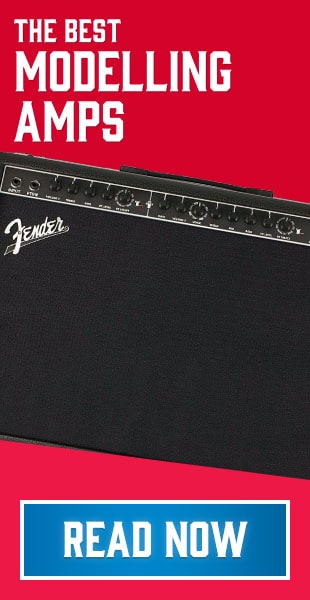 Brands like Line 6, Kemper and Atomic are flying the flag for forward-thinking guitar players and they all have various modelling amp options at different price points.

What are the pros and cons of modelling amps?

Just like anything in the music world, there is no right or wrong answer but musicians definitely have preferences that make a difference to their choice in gear.

The Pros of using a modelling amp:

The Cons of using a modelling amp:

There are various formats that a modelling amp can take due to the fact that it’s a piece of hardware that creates a digital amp sound.

Rack – This simply refers to the amp being rack-mountable in a gear rack along with things like your EQs, Compressors and other studio outboard gear.

Floor Unit – As a floor unit, the modelling amp will take the form of a multi-fx pedal with on-board amp models and cab simulation.

Non-Powered – Non-powered means that you won’t be able to plug directly into a passive speaker cabinet. You’ll need a power amp in order to get volume coming through the speaker. You do NOT need this when plugging into a PA system because the PA speakers will be powered themselves or powered by an amplifier.

Powered – A powered modelling amp like the Kemper Powered Head allows you to plug directly into a passive guitar cabinet as you would with a normal guitar amp head. This will bypass speaker simulation of the Kemper because you wouldn’t want a cab emulation going into an actual guitar cab.

You can use modelling amps both live and in the studio for different reasons.

Live – Using a modelling amp live removes the need for a heavy guitar amp combo or amp head. You can also get a great sound night after night and not have to worry about the sound engineer messing up your sound if you don’t have a dedicated sound engineer. You can set your EQ and sound to come out the PA exactly how you want it.

How do modelling amps work?

Modelling amps work using an analogue circuit that's blended with a digital circuit. This results in an amp which can emulate a multitude of iconic amp models from the past and present. Many contain built-in effects too.

Do modelling amps work with pedals?

Yes. However, the main benefit of a modelling amp is that you have access to an extensive amount of tones in just one amp. This means you don't have to take a massive pedalboard around with you as part of your rig.

What is the best modelling amp for gigging?

The Boss Katana series can be great for gigging - if you choose one with a high enough wattage. The best gigging modelling amps usually work in harmony with your pedals too. This is because they contain enough headroom, ensuring your pedals sound excellent when you plug them in.